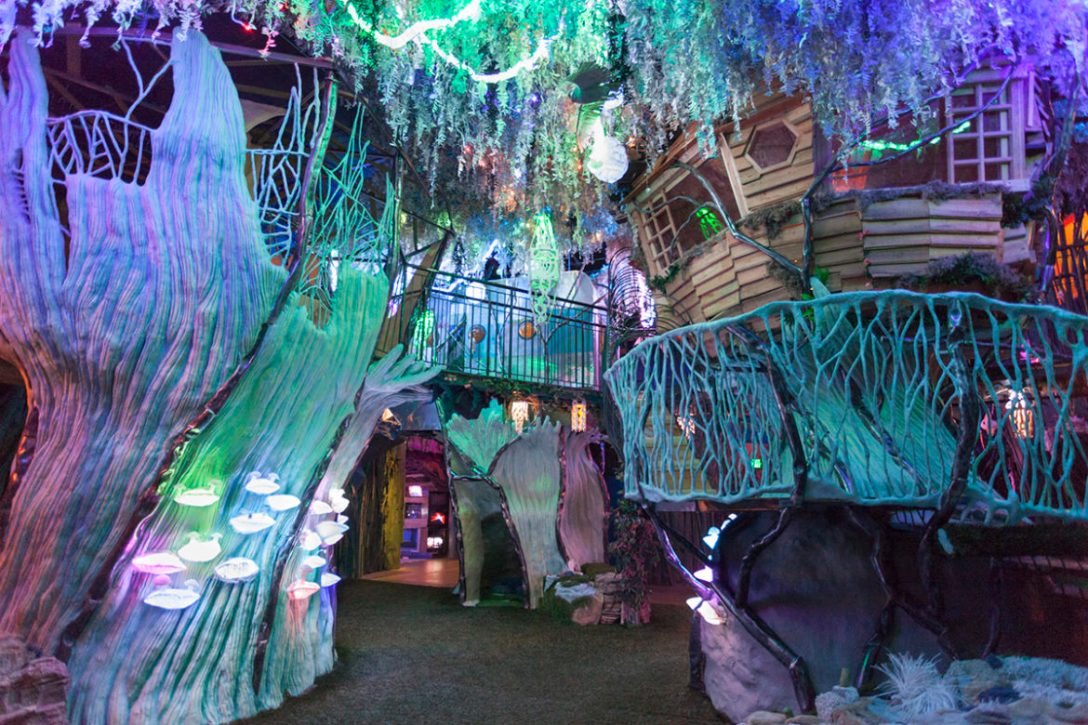 I am writing this piece in response to a recent article on Glasstire.com. For those of you who are not aware of obscure websites that offer information and critique on the Texas art scene, Glasstire offers information and reviews of art openings, galleries, museums, and events within and adjacent to Texas.

The article, titled “How Do You Solve a Problem Like Meow Wolf,” is a scathing critique on the world of interactive art, focusing on Meow Wolf in particular, but extending itself to include Burning Man, festivals, and art fairs. The argument, essentially, is that Meow Wolf in particular, and interactive art in general, is not Art with a capital A, and that such installations are merely entertainment: “It’s fine. It works. It’s not art.”

There are a few things wrong with this statement, which I will dig into later. Of more immediate interest is what the authors do consider art. Per Neil Fauerso, “. . .art intrinsically will be unsettling, discomfiting, even twisted. Otherwise, it is entertainment, or crafts.” He goes on to note an exception to this, “art that’s so beautiful and transporting as to achieve a state of transcendence. . .” This is interesting to me, because it espouses a fundamentally negative view of the world, that all art should be a negative critique of the world around it, except for those rare examples of people who actually have the technical ability and vision to make something transcendentally beautiful, which of course they are the arbiters of. It implies that the viewer of art either be uncomfortable with viewing art, or otherwise take delight in the negative critique the art portrays. It implies that the only valid subjects for the typical artist are things worthy of negative critique or pure transgression. It implies an elite status to critics, curators, and collectors of art; they are the only ones that are allowed to enjoy art, and the neophyte or casual patron must suffer.

In keeping with this theme of elitism is the frequent reiteration of the idea that “real art. . .takes time to appreciate.” They go on to say that real art is something that most people don’t want to deal with. Making art accessible, they argue, “is a real danger to the very integrity of art’s purpose.” They go on to lionize various artists and art movements including John Waters, David Lynch, Dada, Pipilotti Rist, and Ed Atkins, while disparaging the art prevalent at Meow Wolf, Burning Man, festivals, and art fairs. The arbiters of the art world in their minds and words? Art critics, curators, art historians, other artists, and collectors. In other words, the establishment of the art world. By their very nature, these people are all interconnected, a clique that shares provenance, education, network, and financial privilege. Very little of this network of art arbiters has anything at all to do with the merits of the works produced. No opportunity exists to disrupt this paradigm. Interactive art is summarized as corny, watered down, “a ball pit at McDonalds,” and “gasp, populist.” Kusama is a “sweetener for visitors” at museums, fit only to get people in the door.

This is terribly evident in the state of contemporary art today. Technical proficiency and command of the medium have taken a backseat to loose allegories that require pages of statements or explanations. I will freely admit that I am mostly a huge fan of David Lynch (aside from Twin Peaks) but without some kind of background in film theory, Mulholland Drive and Lost Highway are mostly incomprehensible. Rist and Atkins seem to have almost contempt for the medium in which they work, showing little proficiency with the tools they choose to use, and disguising that lack of skill with the absurdist and convoluted themes with which they choose to cloak their message. It is worth noting that Rist’s more recent installations are somewhat more polished, but still failing at achieving the high gloss that many of the installations at big art festivals such as Burning Man exhibit. Chris Burden’s high water mark was a performance of himself being shot in the arm with a .22 rifle. John Waters made a career of transgression, defilement, and disruption. Almost every artist they laud is either based in pure transgression or bitter social critique. Contemporary art, in the main, either has about as much subtlety as a smashing your finger with a hammer or is so shrouded in metaphor as to be completely arbitrary without the artist telling you what your experience should be. And despite my harsh critique, these artists are established and have merit. The irony of this narrow definition? Many of the artists and movements they uphold are themselves reactions to how the previous generation defined art.

No one will be giving Meow Wolf’s House of Eternal Return any awards for social consciousness or patriarchal critique. It is not, to the authors’ chagrin, a manifesto against the evils inherent in modern society. There is not a bit of transgression or discomfort in the whole place. What Meow Wolf is, however, is a testament to the possible, an amazing, optimistic, and hopeful triumph of creation through collaboration. Joy, delight, and nostalgia have been banished from the art world for these last 50 years, and modern interactive installations such as Meow Wolf are the inevitable reaction to it. It is every bit as valid and transformative as Duschamp’s ready-mades and Warhol’s soup cans. And instead of simply attempting to tear down that which is negative through critique, it seeks to completely supplant it with something new entirely. While bad interactive art exists (I completely agree with the authors’ take on the Rosé Museum, and god help us if it ends up in the MoMA), the leading edge of curators have already begun to select the more intelligent and meaningful projects.

With 50 years of the art world telling us what is art, and leaving almost everyone who thought themselves intelligent, creative, or otherwise perceptive scratching their heads at contemporary exhibits and then collectively shrugging and booking it straight for Monet and Van Gogh, is it really a surprise that the popularity of these psychedelically steeped interactive installations are a huge hit? That Meow Wolf and Burning Man and Coachella draw hundreds of thousands of people a year to be inspired and amazed, transcended to a place that speaks of optimism, hope and promise? That, in their own way, and with their DIY provenance, speak to people and tell them that better can be had through supplanting the old by making the new? That critique, which has it uses to be sure, offers nothing in terms of replacement? It should not. And now these people whose lives are fully informed by critical, dark, transgressive art are doing the only thing they now how.

“How Do You Solve a Problem Like Meow Wolf,” offers no solution, only critique. It is as fully steeped in this cliquish view of contemporary art as the dreary and “twisted” art itself. For these critics, the fear is very real, but in this case, misunderstood. Technology has combined with proficiency to create their anathema, and the art it produces supplants the need for their guidance. The reality is that art is moving in a direction of creation instead of critique, polish instead of grittiness, activity instead of passivity, subversiveness as opposed to transgression. Art Fair Art, which they explicitly deride, is a backlash against the inaccessibility of galleries to both artists and patrons that lack the provenance that is so highly vaunted by the authors. They are being left behind by a new vision of art that utilizes techniques they don’t understand, that shows a mastery of medium that is considered unimportant, that carries messages that don’t require their status as an oracle. It is no wonder they have dismissed interactive art as “adult play.”

And Meow Wolf is just the beginning.

Designer, collaborator, builder, and installer of interactive art in Austin, Texas. I dabble in a lot of things, including Arduino, TouchDesigner, WordPress, LEDs, propane flame effects, burnable art, and cuisine. During the day I am a quality assurance expert for chemistry laboratories. View all posts by theblinklab